The traces of history have left a legacy of unfinished space where the area adjacent to the ancient district of the Piazza – urban street that ended with an open space devoid of those public space characteristics implicit in a piazza – has been replaced by a void, understood both as a rarefied spatial entity and as a space which is hidden and has never been present in the historical memory. An experience seemingly simple, but the result of a design process aimed at defining a space where the dynamism of the ” piazza system” is controlled by a rigurous and simultaneously quiet balance.
The design solution is conceived around a system of four open spaces. The piazza is thought as a square-shaped enclosure defined planimetrically by 2.45 meter high walls, performing the role of a diaphragm between the public space of the piazza and the surrounding context. Inside, the geometric order of the square marks a rhythm of the space which through the iteration of the module extends into the new public building, involving and integrating it. The perimeter walls are enhanced in their vocation of the diaphragm, provided with calibrated horizontal and vertical openings: windows facing the exterior. The walls (diaphragm) are made of travertine, as well as the pavement of the square; the wooden slats intervals on its perimeter, the green trees and the fountain water, enrich with organic elements the spaces of the system that reassume semantically the various signs of the surrounding countryside. A system of open public spaces; almost patios defined according to pure geometric figures, in which the horizon is delineated between protective walls creating a direct relationship between inside and outside, all sorted by the play of proportions of Le Corbusier’s Modulor. 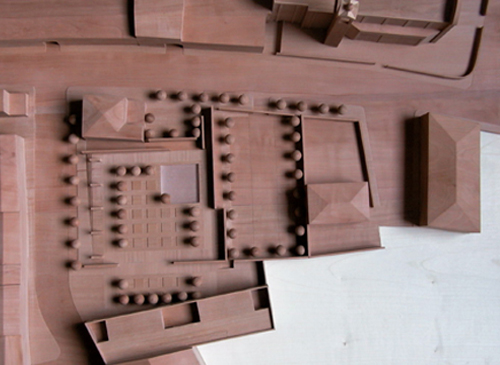 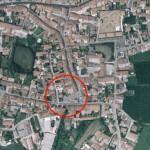 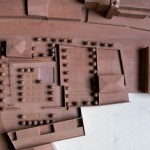 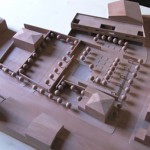 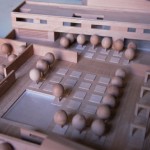 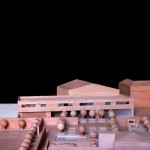 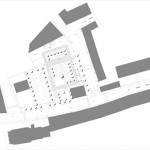 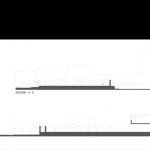 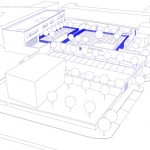 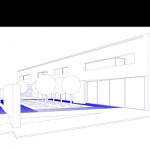 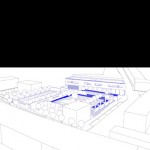 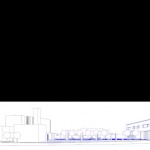